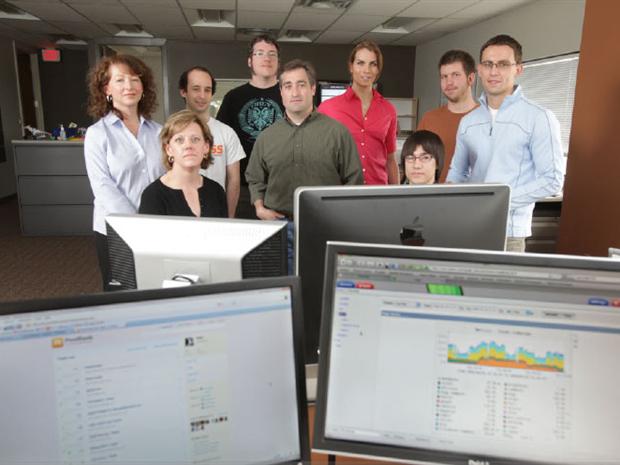 WATERLOO, Ont.
Ilya Grigorik, a skinny 25-year-old computer engineer, represents the future for Ontario. With a passion for blogging and $3-million in seed capital, he launched AideRSS, a Waterloo-based software company that helps people surf online content in an efficient manner. His software, PostRank, works by filtering items according to individual tastes or by popularity — how many hits, clicks, stumbles, tumbles or tweets the item generates.

His service is free, but Mr. Grigorik and his new chief executive, Carol Leaman, have figured out a way to make money with their idea by creating an upgraded software package that allows public relations and marketing firms to track in real time how the blog-o-sphere consumes messages. Eight months ago, AideRSS had four employees; today there are 11. Next year, if the launch goes as planned, staff might double, says Mr. Grigorik.

Ontario’s technology startups are the mirror-opposite of the automaking industry. The number of Canadian jobs in auto manufacturing has fallen by 23,500 since October, according to Statistics Canada, and more casualties are certainly on the way. Downsizing in this traditional manufacturing base has left a crater in the employment landscape.

Situated in the heart of the auto parts manufacturing region, Waterloo is the new tech capital of the country. In this former agricultural heartland, still heavily populated with stoic Mennonite farmers, the story is upbeat. The tech sector here generates more than $15-billion per year, and the employment growth rate is 7%, significantly higher than Ottawa or Toronto.

Technology firms in the Waterloo region employ 28,000 people, and there are at least 2,000 more jobs looking to be filled. The community now boasts 550 technology companies, including the region’s anchors: Research in Motion (RIM), Open Text, the largest software company in the country; and Christie Digital Systems Inc., make of a high-end projection system, to name a few.

All this raises the question: If Ontario is now a “have not” province, can the promise of Waterloo, with its innovation and entrepreneurs, transform it into the “can do” province once again?

“Can Waterloo fill the gaps left by the current economy? I don’t know, but what I do know is what’s going on here is working,” says Tom Jenkins, executive chairman of Open Text. “For a city of 119,000, it’s punching way above its weight statistically,” he says.

Mike Lazaridis, co-chief executive of RIM agrees. Where others see job losses, he sees opportunity. “Rather than worrying too much about all manufacturing jobs that are lost we should be trying to intercept the future.”

Mr. Lazaridis attributes his city’s success to the University of Waterloo. “It’s the strong research universities that spin off strong industry and clusters of companies,” he says, pointing to the University of California, which manages three laboratories on behalf of the U.S. Department of Energy. “We are following in their footsteps,” he adds.

The University of Waterloo, which was created because local insurance companies wanted to train actuaries, has morphed into one of the top engineering schools in the world. More recently, generous donations by Mr. Lazaridis and others have led to the creation of satellite institutes, including the Perimeter Institute for Theoretical Physics and the Institute for Quantum Computing.

But it’s not just technical expertise that is the city’s secret. The region has been able to attract and retain talent by nurturing startups through a network of mentoring organizations and “accelerator” centres, research labs, venture capital firms and angel investors.

Waterloo’s success comes down to a simple philosophy: It takes a community to build a company.

When Mr. Grigorik graduated from the University of Waterloo with his big idea, he turned to Communitech, an organization created in 1997 to mentor innovators. There are six “coaches” on staff who have run successful companies and are giving back to the community. One of the coaches, Ms. Leaman, has become the CEO of his new firm.

“We are on a mission,” says Iain Klugman, president of Communitech. When Mr. Klugman started running the organization in 1997, there was only a handful of startups. Today, he estimates there are 150, and he sees about 10 new ones a month. “While resources have been the backbone of Canada historically, the only thing that can replace economic wealth is to start and grow companies,” he says. “We need to be creating jobs as fast as possible; there is a sense of urgency.”

Not every startup is expected to be next RIM. “What we are doing is building a lot of $20-to-$30-million companies,” he says. The formula is diversity over density.

It is this strategy, say insiders, that helped Waterloo weather the tech-bust of 2000-2001.

Gerry Remers is president and chief operation officer of Christie Digital. Once a Nortel employee, he is now another symbol of the city’s spirit of innovation. In 1994, when Mr. Remers joined Christie Digital (formerly Electrohome), the firm made traditional cathode ray tube projectors. Despite the fact that the old technology generated operating profits in the range of 10% to 15%, he pushed to have the company reinvent itself as a digital innovator.

“It took a lot to convince people to invest in a new and disruptive technology instead of continuing to harvest the existing technology,” says Mr. Remers. By 1999, when Electrohome was sold to Christie Digital, owned by Ushio Inc. of Japan, the conversion was complete. The company, which had 35 employees, now has 500 and revenues have jumped from $50-million to $300-million. Today, he is trying to convince the parent company to conduct all of its research and development in Ontario, a plan that would add 45 new jobs to the province.

That’s not to say high-tech firms in Waterloo have not stumbled. Art Mesher, the chief executive of the logistics software company Descartes Systems Group Inc., says the day he joined the firm as its new chief executive he had to restate revenue. “It was a scandal,” he says. “The stock was trading at less value than cash we had in the bank,” he adds.

To turn Descartes around, he fired all the little “Casnovas” running around selling software and started a new strategy. “We went to 12 top companies, including Samsung and DHL, and told them we should be paid on results; if it doesn’t work you don’t pay,” says Mr. Mesher. At first everyone thought the service strategy was crazy; now they think it was visionary. In two years, the company was turned around. It generated US$66.1-million in revenues for its 2009 fiscal year.

Mr. Mesher believes that in order to survive, companies and communities need constant reinvention. “People always asks, ‘What’s in the DNA here? What’s in the water at Waterloo?'” he jokes. Leadership has been critical. “The leaders have organized themselves to support the recycling of entrepreneurial energy,” says Mr. Mesher.

Still, if the tech sector is going to be the new engine of the economy it has some revving up to do. A report released last November by McKinsey & Company showed that Canada is lagging behind other countries in the OECD when it comes to investment in technology. The United States and Japan issue more than 2.5 times more patents per capital than Canada. These countries also spend approximately 1.3 and 1.6 times more on research and development respectively, according to the report.

And there is concern a lack of venture capital will hurt the province’s startups. “What the McKinsey report shows is that we have to keep our eye on the ball,” says Mr. Jenkins of Open Text. He points out that it took 10 years for the venture capital firm that invested in his company to see its investment paid off.

The good news is that Canadian tech startups do make due with a lot less then their U.S. brethren. “Let’s start waving the maple leaf and stop complaining,” says Rick Segal, a partner with JLA Ventures, co-manager of the BlackBerry fund. “With only $20,000-$30,000 seed money, you can easily parlay that to $2-million in Canada,” with grants and support, he says.

“It’s a myth that Silicon Valley is the place to be. This country can kick butt if they focus.”

While replicating Waterloo in other parts of the province won’t be an immediate answer to Canada’s auto woes, one thing is for certain: “Our most valuable resource is our trained citizens … that is our true national asset,” says Mr. Lazaridis of RIM. “And it’s renewable.”